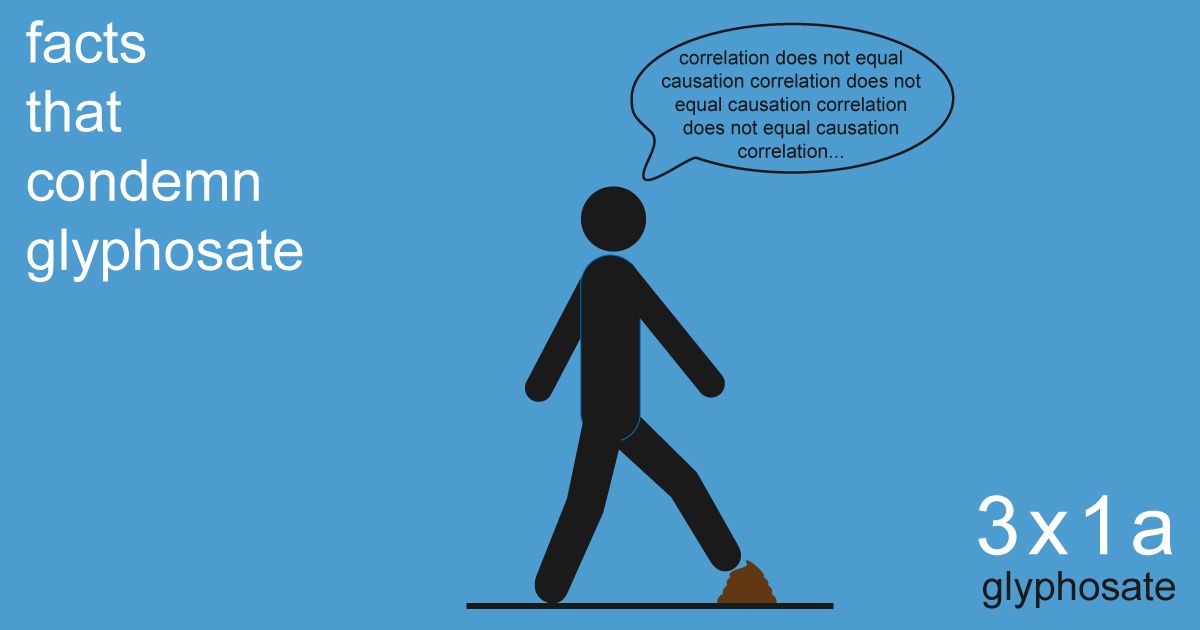 Facts Condemn Glyphosate- Are You Willing to Listen?

Ever watch a dog chase it’s tail? It’s a lot like the argument against glyphosate evidence.

But before you even start reading, ask yourself the following question: Am I really open to the fact that glyphosate is not “harmless”? Be honest. If the answer is no, then stop reading and go do something more productive for yourself. If the answer is yes, then file these golden nuggets away.

If you are reading this and asking yourself, what it is glyphosate?, check out our article, Glyphosate | Make America Great Again and Stop Spraying and then keep reading.

If you’ve already joined the anti-glyphosate club, you’ve been hearing the same old regurgitated argument from proponents of glyphosate, affectionately called “Proglyphs”, that reminds me of a parrot repeating the same sentence over and over:

This sentence gets under your skin.

Know What Correlation and Causation Are

It’s more than annoying at this point. Not just because we’ve heard it over and over, but because it’s clear that people who make this argument don’t seem to understand what causality is.

A positive correlation is an observation that two things happen at a similar rate, however these two things may or may not happen for entirely unrelated reasons. In the case of cigarettes, the Surgeon General wrote his 1964 report based primarily on the overwhelming correlative evidence, drawing a full porta potty of strong criticism from statisticians (i.e., Ronald Fisher who created much of the modern foundations for statistical science).

Showing causation: proglyphs stepping in their own poo

One way of showing causation is to have a randomized, controlled experiment. Such experiments are a highly desirable when they can be done, but it’s not always practical. For example, doing such a test with cigarettes and humans would probably be illegal today. The second and much more common way is to make an argument for the process by which something happens. With glyphosate, the second approach is by far the most realistic – testing the toxicity of a substance on a large human population is ridiculous, and yet Proglyphs are constantly calling for such a test.

Proglyphs argue that the graphs and statistical data only show a correlation between glyphosate and the sudden rise in disease, but do not prove causation. Therefore, spray away. While such data is a correlation, they make two fatal pitfalls by doing this. In other words, they step in their own poo.

It’s enough to make you feel like Proglyphs don’t quite understand what causation is:

As said, there are extremely compelling arguments that explain how glyphosate works and why it’s deadly. The mechanisms are obvious. Glyphosate disrupts essential amino acid synthesis in our gut microflora, leading to a latrine of toxic side effects (like, death) [1].

So let’s look at some causal factors and other considerations that condemn glyphosate and make Proglyphs look rather senseless.

Empirical evidence that glyphosate is toxic

Before we nail the lid on the coffin, let’s look at correlation one more time. If you are already familiar with glyphosate, chances are you have seen these graphs, which come from this sweeping empirical study [2]:

This is the kind of data that Proglyphs love to look at because, despite the overwhelming similarity on dozens of data comparisons, Proglyphs use them as a golden opportunity to say you-know-what.

For example, take the age related deaths due to intestinal infection above. The correlation is unsettling. Okay, but there certainly could be other factors. Correlation does not equal causation.

Let’s take another graph. Thyroid cancer. Also has unsettling correlations. Okay, there could be other factors. Correlation does not equal causation.

Then a third graph. Liver cancer. More unsettling visuals. Correlation does not equal-

Then a fourth graph. Renal failure. Correlation does not-

Then a fifth graph. Then a sixth. Then an seventh. Then an eighth. The list goes on and on. Understand where we’re going with this?

How many strong correlations does it take? Imagine the feeling you would have if you observed a man dump gallons of gasoline all over school house, and then pull a cigarette lighter out of his pocket while bystanders watching this activity just look at him with blank stares and mumble in unison, “Correlation does not equal causation.”

If it were only a few graphs, then that is a different conversation. But we are talking about extremely strong correlations with dozens of graphs: all graphs spike within the same time period that mirrors exactly the spike in glyphosate usage (1996). Instead of “correlation” a much better way to say it is: a logical conclusion.

The fact is that some people just want to dig their heels in and bury their head in the sand, and no amount of correlation or research is enough. It won’t be until the FDA finally says, Well, uh, actually, it seems that, uh, all of that independent research and data was, uh, actually correct, that these people wake up and smell the glyphofarts.

Let’s look at some more condemning factors. This is where people who eructate the correlation does not equal causation argument start to look pretty dense. Correlating factors are found in empirical evidence. The Shikimate Pathway shows why this correlation exists.

If you have read our longer overview article about glyphosate, how it works, and why it’s harmful, this graphic will look familiar. Here how the Shikimate Pathway works:

The Shikimate Pathway interferes with the ability for some strains of bacteria to survive.  Imbalances in gut flora wreak havoc on our system due to toxins and immune responses. The chemistry involved is extremely complex – for more information see this article discussing the biochemistry of glyphosate as a pathway to disease [3].

So, what kinds of gnarly gut-flora related toxins are we talking about? Here’s the general beat on what we know:

For Proglyphs out there: if you wouldn’t call these causal factors, what would you call them?

The long story short is that we have a good idea- biochemically – why glyphosate causes disease not only in humans but also in the animals and plants that we share the planet with. Even still, Proglyphs will say that because the research showing the toxicity of glyphosate is performed on chickens and rats and cows and pigs and goats and other mammals, it doesn’t prove anything. Show us the proof in homo-sapiens.

Well, how don’t the graphs prove what the biochemical research shows us? To the people who want even more proof: Are you willing to be the guinea pig or offer your children up as glypho-guinea pigs?

The statements on this site have not been evaluated by the Food and Drug Administration. Any  health education and or products mentioned or discussed on this site are not intended to diagnose, treat, cure, or prevent any disease. The information on this site is not intended to be a substitute for professional medical advice. The health related and medical information and on this site is provided as an information resource only, and is not to be used or relied on for any diagnostic or treatment purposes. This information is not intended to be patient education, does not create any patient-physician, client-nurse practitioner or patient-pharmacist relationship, and should not be used as a substitute for professional diagnosis and treatment. You understand the service provided by MY LABS FOR LIFE, LLC is a service provided at your request and not suggested by our medical director or education staff.

In concert with evidence-based information, this site proposes certain theoretical methods of functional and nutritional support that may not be supported by conventional or mainstream medicine. Any information obtained from this site is left to the discretion and is the sole responsibility of the user of this site.

The contributors of this site cannot be held responsible for the information or any inadvertent errors or omissions of the information. By visiting this site you agree to the foregoing terms and conditions, which may from time to time be changed or supplemented. If you do not agree to the foregoing terms and conditions, you should not enter this site. The contributors of this site shall have no liability, for any damages, loss, injury, or liability whatsoever suffered as a result of your reliance on the information contained in this site.