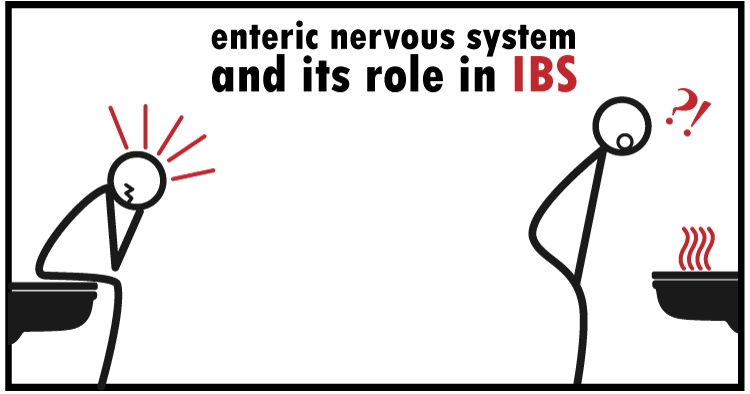 The enteric nervous system (ENS) (sometimes called intrinsic nervous system) is a mesh-like system of neurons that acts as the director of your gastrointestinal tract (esophagus, stomach, small intestine, colon). Think of it like an intelligent sweater that your GI tract wears.

This intelligent sweater has approximately 500 nerve cells [1]. If that sounds like a lot of neurons, that’s because it is. In terms of size, that’s about the size of a cat brain. So, one way to think about your ENS is like a little cat living in your tummy, analyzing the food you eat, the thoughts you think, the feelings you feel! [2]

Why should you care about how many neurons your gut has? Here’s why:

For these reason, your ENS is commonly referred to as your “second brain.” It’s why you feel butterflies in your stomach, get sick, have diarrhea, etc. when feeling strong emotions or anxiety. Emotional duress in your main brain can carry over into your 2nd brain.

But what does your ENS do? Why are we talking about it? What’s it’s role with IBS? These are important questions for people who are victimized by an angry bowel.

Role of ENS in IBS and IBS symptoms

The enteric nervous system is immensely complex and, to be honest, the full scope of its function is not entirely understood. Concerning what we do know, there are several important functions of the ENS to point out.

What all of this means is that enteric nervous system is a central contributor to regulating:

Now you see why we are talking about your enteric nervous system. For anyone experiencing symptoms of IBS, this list may look uncomfortably familiar. The ENS plays the central role in irritable bowel syndrome and the symptoms of IBS. If you want to know why you experience certain IBS symptoms, the causes of IBS, etc., you need to know about the enteric nervous system – your 2nd brain.

If you are enjoying this article, see these other articles for some more informative and (sometimes) fun information about your health:

Long story short, while IBS is a blanket term for a wide swath of conditions with several potential main causes (parasite infections, small bacterial overgrowth syndrome (SIBO), toxic mold syndrome), the primary culprit of IBS appears to be a disruption, miscommunication, fighting, (whatever you want to call it), between the ENS and your main brain. We even have a rather ominous term for it: “enteric neuropathy.”

So without further ado, here are the 6telltale symptoms of IBS you usually won’t see hanging out on other websites.

Fecal incontinence is the inability to control bowel movements. It’s the reason people with IBS have a mortal fear of long car rides, airplanes, long lines at porta potty’s, etc.

There’s no downplaying just how embarrassing this problem is for many people (about 2-3% of the population), and what a source of anxiety it is [3]. No kidding, it can be downright debilitating. Not everyone who is taking anti-anxiety pills before flights is doing so because they are scared of flying.

Fecal incontinence can range from:

People who struggle with this tend to always have a mental map of their environment, which includes where the bathroom is and how far away it is, at all times.

There are several likely ENS causes of fecal incontinence in people with IBS:

If you struggle with IBS-D or IBS-C, you very well may have a “faulty switch” in your ENS to blame.

Pruritus ani is an extremely common IBS symptom that most websites are reticent to discuss. Unfortunately, the many causes of an itchy butt also tend to be many of the symptoms of IBS, like:

Like the itchy butt symptom, the painfdful rear symptoms is not a symptoms most other websites are chomping at the bit to discuss.  This is disservice to reqaders because proctalgia fugax is a strong hallmark of IBS.

No kidding, going to public restrooms can be a significant source of concern for people with IBS. Some of the following questions are often on IBS-victims’ minds when in public:

These fears can be extremely embarrassing if they come true – and for many people with IBS they have come true in the past. Not everyone is taking anti-anxiety pills before an airplane ride because they are afraid of flying: they might just be scared of the “bathroom situation.”

Why can people with IBS have such foul smelling poos? For one, if you gut motility – which moves food through the colon and is controlled by your ENS – is poor, then food can begin to ferment and putrefy in your gut. They could also be a sign of unhealthy gut flora (think, Small Bacterial Overgrowth Syndrome).

Whether SIBO causes IBS or IBS makes you vulnerable to developing SIBO, the fact is that the two problems go hand in hand. SIBO may be the underlying cause of your IBS. SIBO may be a product of your IBS.

Unlike a formal IBS diagnoses, establishing whether or not you have SIBO is as simple as taking a SIBO breath test. Literally, breathe into the breath test, which can be done for home, and find out if your small intestine is infested with bacteria that doesn’t belong there.

So long story short, if you DO have SIBO, there’s a high chance you also have IBS.

Of all the symptoms you usually don’t see on other websites, this one is probably the ‘big shocker,” and the one that makes you say, “Wait, what?” The CDC recently found that kids with autism are 350% more likely to suffer from GI problems such as diarrhea and constipation [5]. Other  studies have found significant differences in the gut flora of children with autistic disorders as compared to neurotypical children.

The basic fact is that having autism makes you more vulnerable to having IBS. If you are on the autistic spectrum, or if you have a child on the autism spectrum, you will need to be vigilant about symptoms of IBS.